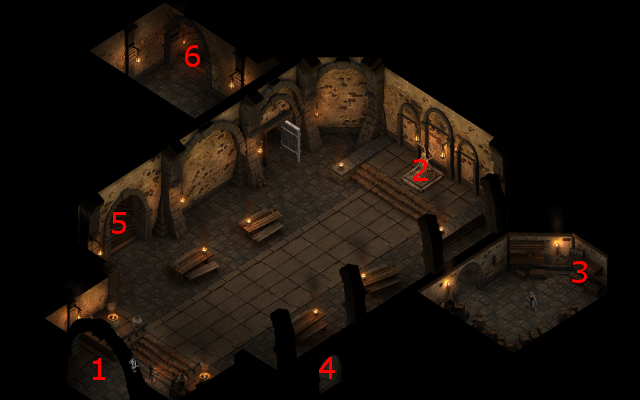 *Evil* A Call to Court

I show this part from the perspective of the evil party. Zakara returns to the Great Hall in Caed Nua. Just ahead will be a Palace Messenger, who informs me that somebody named Lord Gathbin is disputing her claim to Caed Nua.

*Good* Alliria likewise asserts her claim to Caed Nua, but typically tends to go with Benevolent, Diplomatic or Passionate replies even when the result ends up the same. Zakara typically goes for Aggressive or Cruel replies in the same situations. 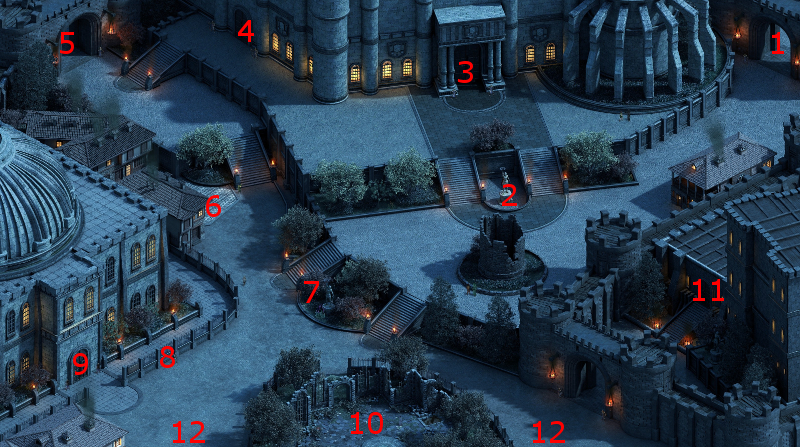 The entrance to the Ducal Palace is at #3 on the First Fires map. 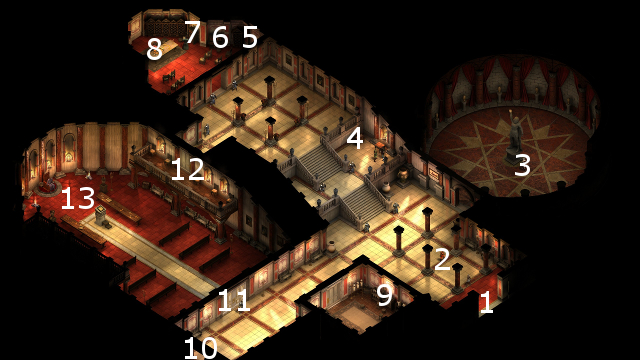 Chancellor Warrin and Marshall Fowyn will be at #8 on the Ducal Palace map. They inform me that they are awaiting Erl Bademar's decree as to who is the rightful Lord or Lady of Caed Nua. Zakara questions Warrin at length.

Lord Gathbin arrives once I am finished with my questions. Erl Bademar's decision is that Lord Gathbin can reclaim Caed Nua as his rightful estate, but only if he provides sufficient compensation to Zakara as the liberator. Lord Gathbin won't accept the decision, and Zakara in the course of that dialogue chooses Aggressive options whenever possible, including punching Gathbin in the face.

Once Gathbin has left, Zakara also chooses the Cruel option of informing him that she will have him or any of his people executed if they are ever caught on Caed Nua lands.

Lastly, I am rewarded with the Soulbound scepter called Gyrd Haweanes Stenes. I bind it to Aloth for the rest of the game. It will serve as my default weapon, and it's a sound choice since its Dominate power will often sow chaos amongst my foes. However, keep in mind that I prefer other weapons for other situations. I prefer Kalakoth's Minor Blights when I want Aloth to crank out damage during a lengthy battle. I prefer to have Abydon's Hammer equipped when I want Aloth to use higher-level offensive spells. Still, the scepter provides a good option either by default or in some battles where I may want to take advantage of the Dominate power.

*Good* I have Hiravias equip the scepter as an interim and secondary weapon, although his use of it will not be on the same level as Aloth's. An interesting benefit for Druids that rely on Spirit Shift is that a shot from the Scepter has a chance of recharging Spirit Shift. Mind you, there aren't a lot of battles that last long enough for this benefit to become especially meaningful.

First, I have the Orlan Rogue take the Riposte ability on his 7th level-up. Riposte provides a chance to inflict a counter-attack when an enemy Hits or Grazes the Rogue. It's a perfect ability for a tank-Rogue build, since even Grazes will trigger it.

The good party returns to the Great Hall. The Mourning Gloves will be waiting for them in the rewards chest as a reward for completing The Mourning Circle companion adventure.

They become Alliria's gloves for the rest of the game. Bonuses to Attack Speed and Endurance on kill are the key benefits. Minor increases to Defenses, Concentration and Interrupt are sugar on top. Arguably the best gloves in the game, but especially so for a dual-wielding character that places a premium on Attack Speed and Endurance recovery. And especially so for a Kind Wayfarer character that is built around garnering multiple benefits upon inflicting the killing blow.

*Evil* The Nautilus of Or-Grammon

When the evil party returns to the Great Hall, The Nautilus of Or-Grammon will be waiting for them in the rewards chest as a reward for completing The Ivory Horn companion adventure. It can summon a Rain Blight once per Rest, which can come in handy during particularly intense fights. I save it for Maneha.

I speak to the Steward again. Now that the Never Far From the Queen quest has been completed, she informs me of two things. One, Renengild, the mayor of a village to the north named Stalwart, has sent a letter requesting my aid in opening the legendary Dwarven stronghold of Durgan's Battery. Second, there is a conflict northwest of Caed Nua between a mercenary group known as the Torn Bannermen and a powerful archmage named Concelhaut.

This conversation starts the Durgan's Battery and the Siege of Cragholdt quests.

I leave the Great Hall, and rest up. Kana at some point wants to discuss animancy with Alliria. There are no in-game consequences for any dialogue choices.

I continue to rest up, always with the Woodland Trails resting option (+3 Constitution, +2 Athletics). The reason is so that Hiravias will be able to make the most difficult check during a scripted interaction that is coming soon.

A Palace Messenger arrives after I have rested enough times. I go back into the Great Hall and speak with the Messenger again, who informs me that Chancellor Warrin wants to speak to me again.

*Note* I postpone actually seeing Warrin for quite some time yet, because I want to go to Stalwart Village for a while. No need to worry, this quest will keep for when you're ready to do it.

I plan to leave Caed Nua for far away, but I first want to get an attack on Caed Nua out of the way. I rest repeatedly until the attack is announced as pending. This time it's by Cuthroat Bandits.

Alliria, Kana, and the Orlan Rogue attack the nearest enemy. Grieving Mother hits as many as she can with Phantom Foes. Hiravias positions himself near as many enemies as he can, casts Returning Storm and then Moonwell. Sagani and Ituumak team up to take out the enemy Wizards one by one. The battle pretty much takes care of itself after that.

I rest up with the Woodlands Trail option, leave Caed Nua, and head for Stalwart Village, which is my next destination.

*NOTE* As for resting up options, I tend to go in two directions. All things being equal, my first preference for either party is the Forum bonus that provides +3 to Intellect. It prolongs the area-of-effect and duration of my spells and other powers. Sometimes though, I select the Woodland Trails option if I need to go an unusually long time and distance without Resting or if I need the bonuses to Constitution and/or Athletics for scripted interactions. The need for higher Constitution and Athletics plays out more frequently for the evil party though, since Aloth frequently gets fatigued faster than other characters or he can otherwise be vulnerable to sustaining injuries during scripted interactions without the Athletics bonus.

*NOTE* HOWEVER, I had the evil party take the Tower resting option for a bonus to Perception. The reason being so that Aloth can make a Perception check at a crucial point during a scripted interaction that will soon come.