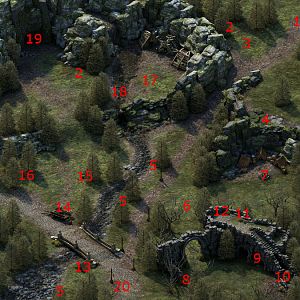 Alliria arrives at #1 on the map of the Valewood, but she isn't going to explore it. At least not for now. She makes her way south along the road. She hugs the riverbank just a little west of the road, and collects any River Reeds (at points labelled #5) along the way. The point is to avoid any fights for now. I reach the World Map exit at #20. 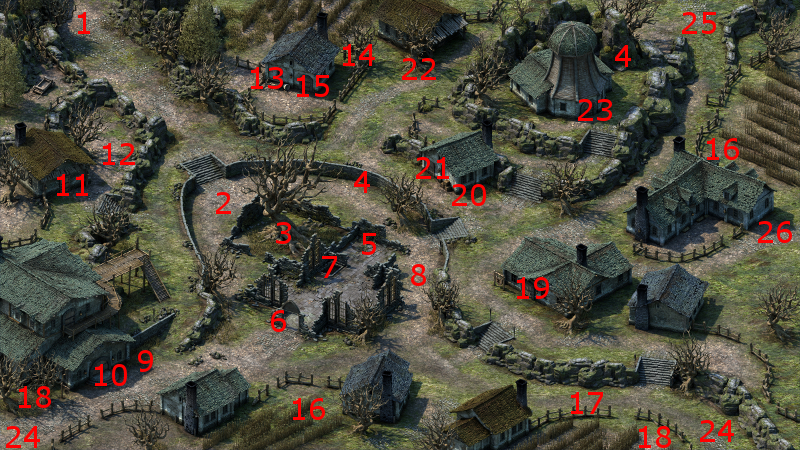 Alliria now arrives at #1 on the map of Gilded Vale. She walks ahead to #2, where she has an extended conversation with Urgeat. She chose Benevolent, Diplomatic and Passionate dialogue responses at various points in the conversation. A bell rings three times in the distance, signalling that Lord Raedric has sired a Hollowborn child. This event marks the conclusion of The Gilded Vale quest and the start of the Visions and Whispers quest.

*Evil* Zakara chooses a Clever reply at the outset, and then Aggressive replies two times, during the conversation.

Zakara continues south until she reaches #9 and witnesses a brewing conflict between Aloth and some drunk townsfolk. A fight is inevitable, but Zakara chooses Aggressive replies whenever she can. The drunkards are themselves very easy to take down. Aloth joins me at the conclusion of the ensuing conversation.

I next grab the nearby Pilgrim's Crown at the south edge of town, and briefly hit the exit simply to expose Magran's Fork on the World Map.

Now I advance Aloth to his second level. He takes the Marksman talent to augment his ability to strike at a distance with a wand or scepter. He also learns the Eldritch Aim spell.

*Note* I'm not selling everything I've collected along the way. I'm also holding onto some extra interim gear to give to my new comrades as and when they join me.

Alliria takes on Aloth as well, but only as an interim companion. 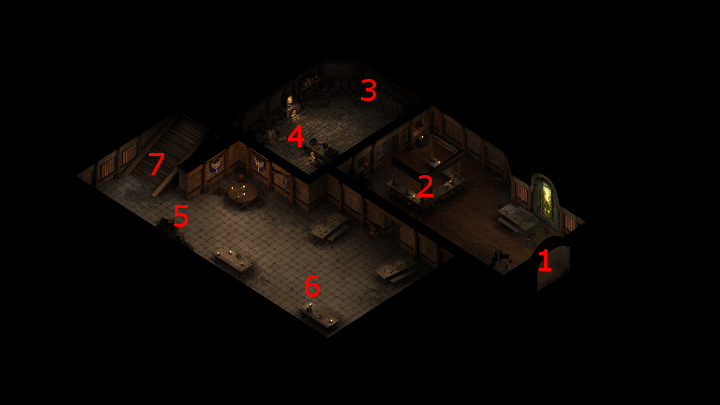 Alliria and Aloth now enter the Black Hound Inn. Devil of Caroc is still quite a ways from joining me, so my immediate priority is to set myself up with somebody who provides the same functions in the interim.

I speak to Pasca at #2, and sell her just enough loot (Clothing, an Amethyst, The Disappointer) to bring my cp total to 250+. Now I go to the hire adventurer option, and pay 250cp to hire a Level 1 adventurer. I emphasize Might, Dexterity and Perception. I make him an Orlan Rogue. He'll be from the Living Lands so that he starts off with a Spear and a Small Shield, plus the +1 bonus to Might. I also give him the Laborer background so that he has a +1 bonus to both Athletics and Mechanics. I decided to name him Mornakin.

Alliria speaks to Pasca again, and selects the Common Room resting option to avoid paying any cp. She now experiences a nightmare of a Dwarven Animancer hanging dead from the tree in Gilded Vale, and yet her spirit revealing that Alliria has become a Watcher. To rest after arriving in Gilded Vale and triggering this vision is a necessary step for completing the Visions and Whispers quest.

Alliria now speaks with the spirit of Caldara de Berranzi at #3 of the Gilded Vale map, where she learns more about her Watcher condition.

This conversation marks the completion of the Visions and Whispers quest and the start of The Old Watcher quest.

Alliria selects the Zealoius Endurance aura. It is a modal aura that adds +3 Damage Reduction for the Paladin and all allies within its radius. The idea is that Hiravias will take the Gallant Focus talent, so that I benefit from two auras overall instead of just one.

As for which spells Aloth selects, see just below.

Zakara likewise picks up the Zealous Endurance aura. It will ultimately be Maneha who takes Gallant Focus once she joins.

Aloth learns two spells. One is Miasma of Dull-Mindedness. It imposes -6 penalties on Intellect, Perception, and Resolve. It only affects enemies within its radius. Since it reduces Deflection through the Resolve penalty, it will stack with powers or spells that directly debuff Deflection.

The other spell is Mirrored Image. It provides a Deflection bonus of +30, which gets reduced each time the caster gets struck in combat. Can be useful in a pinch, since even the best efforts to protect the Wizard by hiding behind a tank or using crowd-control can sometimes not work out.

You'll find Eder at #6. It doesn't take much to get him to join. I pick Aggressive and Clever replies whenever possible.

I also level him up to 3rd level. He takes the Weapon and Shield Style talent at 2nd level, and the Defender modal ability at 3rd level.

The video concludes with me grabbing the nearby Blood Moss at #5 north of the tree.

Alliria takes on Eder as well, but again only as an interim companion.

Alliria and company head over to the town mill, the entrance to which is at #23 on the map of Gilded Vale. Several townsfolk, led by a Dwarf named Sweynur, are having it out with the owner of the mill, an Elf named Trumbel. Sweynur and his pals will end up on the first floor of the Black Hound Inn at #6. This encounter triggers the task called Against the Grain.

There are multiple ways to resolve the feud:

Alliria goes the third route, and is able to make the Resolve check of 12 to get the round of drinks for free.

The video concludes with her returning to the Black Hound Inn after having informed Trumbel of her success.

*Evil* Against the Grain

Zakara chooses a different course. She makes an Aggressive reply with Trumbel, but that doesn't stop them from reaching an agreement.

She then chooses the Aggressive reply to goad Sweynur into a fight, which is easily won. She will take a moderate hit to reputation with Gilded Vale, but gains it back when she informs Trumbel of the conflict's end.

The evil party returns to the Black Hound Inn.

I go up the stairs at #7 on the map of the first floor. 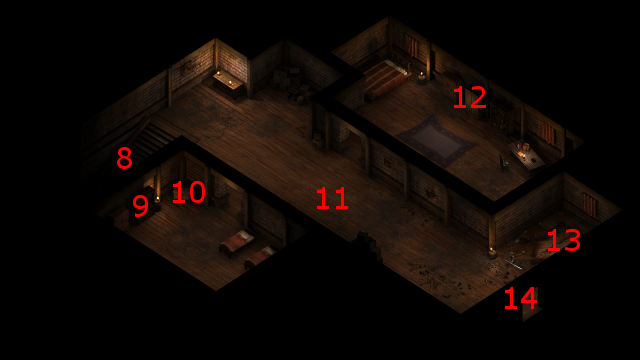 In a chest at #10 is a random item from the "Gilded Vale - Inn Second Floor" section of the random drop list. Problem is, there's an Inn patron watching it. The solution is simple. I have Aloth unlock it. The party then leaves the room. Aloth goes into Stealth mode and then opens the chest.

As it's the 9th day of the month, I get the item I want, a Ring of Overseeing. Aloth quickly leaves the room before his cover is blown, so as to avoid any patrons going hostile for catching me stealing. I hold on to the ring for Durance when he joins.

*Good* The good party actually passes some time exploring other areas before taking advantage of this chest.

My next destination is Valewood.