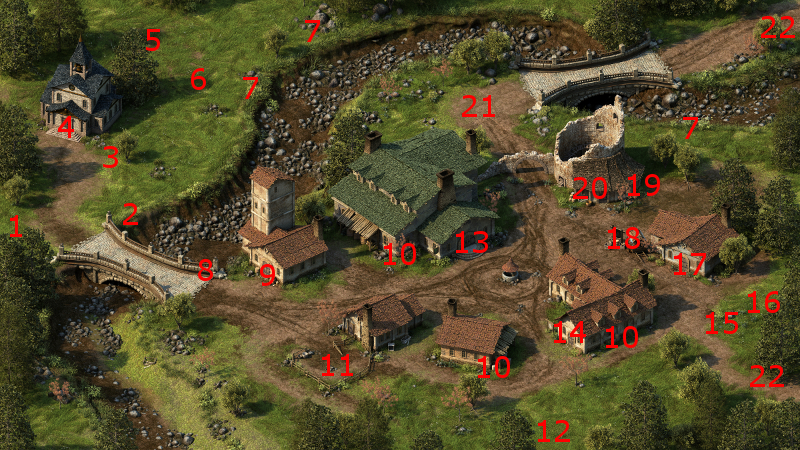 The good party arrives at #1 on the map of Dyrford Village. It just so happens that construction of the Merchant Stalls has been completed, which means that a general goods merchant will now be available in the Great Hall. I now select the Artificer's Hall for construction. The reason is to make a Mechanics resting bonus available if I need it.

Alliria now speaks with the House Harond Guard at #8, who relates that Lord Harond's daughter has gone missing and it would be appreciated if I found her. This conversation triggers the Blood Legacy quest.

Alliria next speaks with Rumbald at #11. Rumbald wants me to hunt down and kill the Ogre who's been stealing his pigs. This conversation starts the quest called A Farmer's Plight.

Alliria now speaks with Hendyna at #18. She wants me to find a Drake Egg from Dyrford Crossing that she can use as an ingredient for her recipes. This conversation starts the Nest Egg task.

The entrance to the Dracogen Inn is at #13. 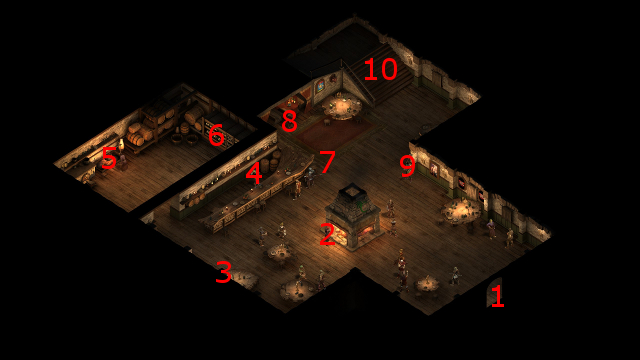 You'll witness an argument between an Elven Nobleman and the Innkeeper once you step in. The Elven Nobleman, Lord Harond, will end up at #7 on the map of the first floor of the Dracogen Inn. I speak with him at length about the disappearance of his daughter, Aelys, and his reasons for being in Dyrford. His answers are less than forthright, but the conversation nonetheless progresses the Blood Legacy quest.

I leave the Inn and go west, to speak with Medreth at #2 on the map of Dyrford Village. He indicates that he would like me to trick an Orlan woman named Nefre into coming to him so he can exact justice on her for supposedly being a mass murderer. This conversation triggers the Cat and Mouse task.

At this point I'll explain what my preference is in terms of possible ways of going about the Task. A good party may initially be inclined to tip Nefre off to Medreth's presence and intentions, giving her a chance to flee. However, this earns Deceptive disposition, which is detrimental to Alliria. And I considered Untroubled Faith to be a wasteful and unnecessary talent.

Furthermore, I want Alliria to get into good graces with House Doemenel. The reason is that, much further down the road, they will offer her a talent that is much better suited to her build than what is offered by House Doemenel's rivals. That certainly means that I don't want to kill Medreth and his minions.

I could choose the route of tricking Nefre into walking into Medreth's trap. This would earn positive reputation with House Doemenel, but it would also earn Deceptive disposition, so that's a no go.

My preference is for Alliria to wholeheartedly believe Medreth's yarn about Nefre being a murderer. No questions asked, ignorance is bliss, and so on.

Therefore, I have Alliria agree to the Task immediately without probing any further about Medreth's agenda.

I return to the Dracon Inn. The stairs to the second floor of the Inn is at #10 on the map of the first floor. 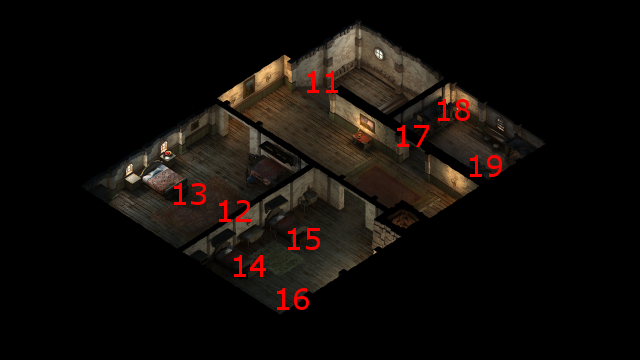 Nefre and her crew will be in the room at #12 on the map of the second floor. Alliria chooses the option of attacking immediately on the assumption that Nefre is indeed a mass murderer. Battle begins immediately. It's fairly easy to win. Hiravias starts with a Returning Storm spell. A path is clear to their Wizard, so I sick Ituumak on him immediately. Sagani and her pet take the Wizard down quickly.

They leave a lot of loot behind. The notable item will be a Leather armor called the Night-Runner, which becomes Sagani's armor for the rest of the game. Note that Sagani prefers to avoid up close combat whenever possible. Even her melee weapon has extended range. So the +15 defense vs. Engagement gives her the real possibility of giving an up close enemy the slip and taking up a more ideal position at a distance. The +2 bonus to Stealth will also help when she needs to sneak around, which can come into play during certain quests. I will add the +2 Perception bonus and Corrode-Proofed enchantments when I get the chance.

Alliria goes back to Medreth, and receives 1,000cp, an xp reward, and a gain of reputation with House Doemenel as rewards.

*Evil* The evil party plays it pretty much the same way, with small differences being that Zakara selects Aggressive options whenever possible, and persists in killing Nyfre even when aware that Nyfre may not actually be a murderer.

The good party now has enough experience to advance to their 6th levels. Alliria gets the Two Weapon Style talent, which is the natural choice. It increases her Attack Speed by 20% when she's attacking with her pair of Sabres. Anything that will increase the chances of triggering her Strange Mercy power is a must.

Kana will get Superior Deflection. It's an easy choice for the main tank.

He also obtains the Shatter Their Shackles, Cast Off Their Chains! Invocation. Remember that I don't have a Priest in the party, so I rely on Kana to fill in some of those gaps. He's ready to use it if he has enough accumulated phrases and if it's necessary to free his comrades from Paralysis, Petrification and Stuck.

Hiravias obtains the Superior Deflection talent, which is natural for his off-tank role.

Grieving Mother obtains the Greater Focus talent, which provides a +2 bonus to Focus on every strike that she makes in combat.

She also acquires the Soul Ignition power. It provides a source of single-target damage, but also inflicts damage over time on nearby enemies, which can set them up for extra damage by Sagani's pet fox through the Predator's Sense ability.

Sagani acquires the Merciless Companion talent, which allows her pet fox to inflict an extra 30% damage on targets subject to Sneak Attacks. Given that multiple members possess abilities that can inflict status effects like Flanked and Prone and Stun, the extra damage will come into play a lot of the time.

I go back to the Dracogen Inn. The innkeeper, Dengler, will be at #4 on the map of the first floor. I speak with him at length about the whole situation involving Lord Harond and his daughter. A Perception check of 13 leads to the discovery that Aelys previously seemed as though she was looking for every available opportunity get away from Lord Harond.

I sell off all my excess loot, rest up with the Dragon's Lair resting option, and then leave through the front door.

Zakara speaks at length again with Durance, with the subject being his staff that is etched with burning symbols.

I also sneak in at the end questions as to his views about the Hollowborn crisis, since he is very willing to answer those questions before finally losing patience. 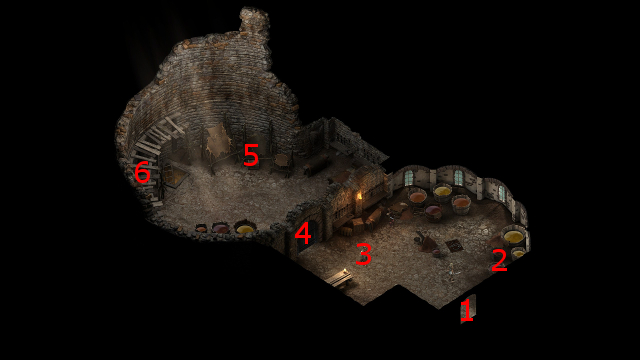 I start off at #1 on the map of the Curriery. A barrel at #2 has the Curriery Key, which can open the door at #4. But I prefer to pick it open myself for the experience.

Trygil and his apprentice, Sabhan, will be at #4. I speak with Trygil about Rumbald, the Ogre who stole his pigs, as well as Lord Harond and Lady Aelys. Trygil admits to having been in the company of Aelys, but foists the blame for her disappearance on the Ogre. He also sells a few wares, but nothing that I'm particularly interested in.

I have the Orlan Rogue pick the lock on the door at #4, which provokes Trygil and Sabhan into attacking me. I kill them easily enough and loot their bodies.

The stairs at #6 lead to the Dyrford Ruins, but I prefer to use a different entrance and later on.

I head to the world exit at #22 in the northeast corner of the map, so as to make Dyrford Crossing available.

The evil party heads back to Dracogen Inn for a rest again. Zakara now asks Durance questions about Ashfall Cathedral, although his patience is shorter than usual about the topic.

The evil party likewise heads to the world exit at #22 in the northeast corner of the map, so as to make Dyrford Crossing available.