*Note* This map only shows content that is specific to Part 1 of the White March expansion. Follow this link for content that gets added to Stalwart Village during Part 2. 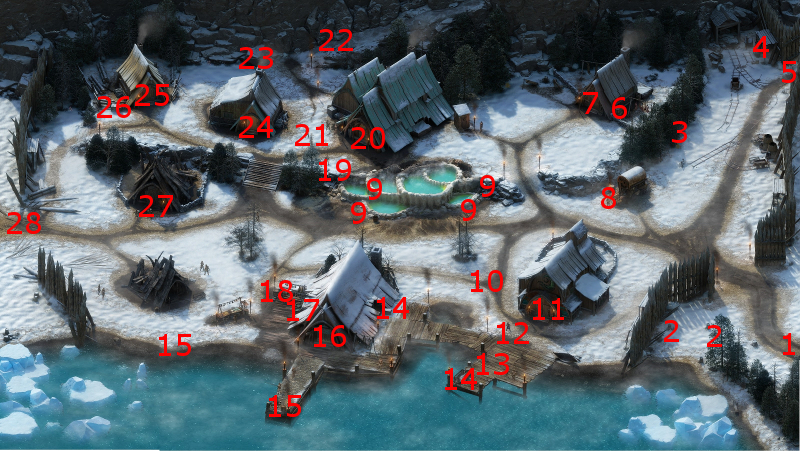 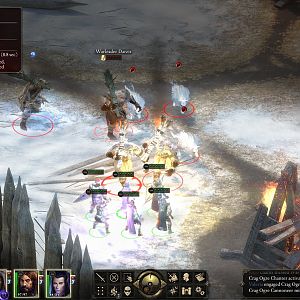 The first time you come here, the village will be under attack by a lot of Crag Ogres throughout the whole map. In fact, there will be three in immediate view. They hit for a lot of damage, and their front line warriors can basically do an exaggerated version of the Barbarian's Carnage ability that can also knock characters Prone. Any Crag Ogre will leave behind Ogre Blood when killed. They have a lot of Endurance, and yet weak Deflection and Will and Reflex Defenses. Therefore, ganging up on them one at a time, and using spells that target those defenses will prove effective.

They will also be helped out by the odd Winter Wolf or two. Much like their D&D equivalents, these wolves can use a breath attack that can inflict cold damage on multiple party members. Any Winter Wolf will leave behind a Wolf Hide when killed.

There are only one of two ways to end the assault on Stalwart Village. One is to take out their leader, Warleader Darzir, who is near the west gate at #28. If you succeed at that, any remaining Crag Ogres and Winter Wolves still alive will flee the village. The other way is to wipe out every single Crag Ogre and Winter Wolf in the village, Darzir included. Keep in mind that you cannot camp in the village or rest in the local tavern while the village is under attack.

A low-level party simply will not have the resources to wipe out everything off the map and still have enough for Darzir. However, a relatively unscathed lower-level party can defeat Darzir and his bodyguards with some effective strategy (and a little luck). And remember that there is no extra xp for killing everything, and therefore no real incentive to do things the hard way. My advice after the first fight is to make your way south and west along the shoreline where you should run into at most two or three enemies at a time, and hopefully keep everyone close to full health and enough resources to manage Darzir. Save your best and your most, healing and offensive and buff spells, for the battle against Darzir. Darzir himself will leave behind the Ring of Changing Heart afterwards.