Head to Nettikasinot24.com to find the best Finnish online casinos on the market.

Are you looking for the best betting sites in Sweden? Check out Läktaren.se.

If you are looking for an online casino in Sweden, we recommend you to visit Casivo.se. All the casinos are safe and regulated.

Find the best nettikasinot for Finns – the best casino guide in Finland with exclusive bonuses.

Sign up at Norges Casino and claim 100 registration free spins!

86 guests are currently browsing the forums

If you're in Sweden and looking for top online casinos, check casinofeber.se for helpful reviews!

Playing a online casino could be more profitable if you know all the rules of your game. Check it out and learn.

Are you living in New Zealand and are you looking for a casino guide? The best online casino nz guide gives you information on what to play, walkthroughs of casino games and of course guides you to the best place to play online.

The Kickstarter for Zoria: Age of Shattering has passed the 50% mark:

​
Secret goal has been achieved! - What does it mean?

Congratulations! The secret goal of 50% has been achieved; let us present you with the reward!

Nightwarden will be available to join your team - they will bring new skills and possibilities in combat!

Let's sink into the lore:

The world of Zoria is, while full of magic and wonder, also full of dark nightmares and horrible, unnatural things. It is, therefore, quite understandable that some of those who have experienced the horrors of Zoria's darkness and have stood face to face with monsters, demons, and the undead, now seek a way to make sense of this dreadful world they find themselves in and somehow cast some light into the darkness. And that is how the Torchbearers of Miedden, a semi-religious order, came to be.

While not outright worshiping any deity, the Torchbearers hold to a creed that mixes the teachings of Athy and Amaldir and considers themselves heralds of balance and the natural order. Anything outside what they believe to be "natural" must be exterminated. That isn't to say that the Torchbearers are a military order either. Most of their activity revolves around bringing solace to those that have suffered at the hands of monsters and the people who make use of them. However, the Torchbearers are most famous due to the very small and well-trained group of warriors serving them: the legendary Nightwardens.

Masters of weapons and alchemy, the Nightwardens travel the roads of Uram, usually under cover of darkness, and seek out humane and otherwise monsters. Armed with serrated blades and lethal one-handed crossbows, Nightwardens hunt and execute their prey without mercy and care little about honorable combat, employing, when needed, even deadly alchemical bombs that choke, maim and burn. But fearsome, Nightwardens are often seen as good omens passing through villages and small towns. It is customary in remote settlements around Elion, especially those bordering forests, that mothers say to their children, Nightwardens watch over you when they put them to bed.

Nightwardens perform their hunts for free, as they believe it is their duty above all else, relying on the fat coffers of the Torchbearers for their day-to-day costs. Some of them, however, offer their skills up for hire and act as mercenaries when their interests align with their employers.

We're already super excited about the new class; seeing it in action is just a pleasure.

Almost $20 000 has been raised, and we're not stopping; more updates are coming soon! Once again, thank you for your investment in the project; we can't express how grateful we are for your support!

Make sure to find out more about playing at the top online casinos, video slots, and betting sites offered at inkedin, and how users can bet safely and securely!

​
How a 25-year-old German MMO became a Pokémon fangame

When talking about the pioneer MMORPGs of the 90s - Meridian 59, Ultima Online, EverQuest, etc - there is a name that is often overlooked: Tibia, a German free-to-play MMO first released in 1997.

More than just curiosity or historical artefact, Tibia has one of the longest and most interesting stories among MMOs.

The game was created by students at the University of Regensburg in Germany. In 1995 they began planning to develop something similar to MUDs (text-based online games), but with graphics and more elements from single-player RPGs:

"We were inspired by the Ultima series, especially Ultima VI and the possibility to interact with everything in the world of the game. Every item that was there could be taken and used - we wanted to combine that with the possibility to be on the move together with others in the game world."
- Stephan Vogler, CipStudio's Founder

Just like Ultima, Tibia has a very interactive world, allowing you to move objects around and combine them. Even on the very first version you could combine flour with milk and place it over the fire to bake cookies.

While Tibia would go online on January 7th, 1997 (predating MMOs like Ultima Online and Everquest), the truth is that this first version was an alpha release with barely any content. It would take six more months until enemies and NPCs were added, and only in May 1998 would classes, skills and spells be introduced.

Find everything you need to know about Australian online pokies at Toponlinecasinoaustralia.com!

You thought it was turn based, but it was me, DioField

The DioField Chronicle is an odd one among the cavalcade of tactics we've seen this year. It's real-time, rather than turn-based; it's about tight, compact skirmishes rather than drawn-out battles. DioField mixes wyvern and rifles, swords and sorcery, and even some airships for good measure.

Throughout the 20-ish hours it took me to finish The DioField Chronicle, there are some pretty cool concepts and ideas on display, though they're not always framed the best. There's a solid story, but some odd choices in direction. DioField is an interesting strategy game to play, even when it's not at its best.

Jade in the rough

The DioField Chronicle feels destined to be called a hidden gem years from now. Despite some faltering and misgivings, I can't help but enjoy the loop. Sending your units into combat, raining magical power down on enemies as your cavalry charges in and assassin tears up the backline, just feels good in DioField.

It hasn't hit the heights of other strategy RPG contenders, but The DioField Chronicle shows a lot of promise. It's different, it's engaging, and it's got a fast pace that moves from battle to battle. I felt like I got a good, interesting strategy RPG experience out of this first game, and I really do hope there's more in store. DioField certainly has the space for it.

​
​
Winner of more than 200 Game of the Year Awards, The Elder Scrolls V: Skyrim celebrates 10 years of adventuring in stunning detail. The Anniversary Edition includes a decade worth of content: the critically acclaimed core game and add-ons of Skyrim Special Edition, plus entire pre-existing and new content from Creation Club including quests, dungeons, bosses, weapons, spells, and more.

EPIC FANTASY REBORN
Skyrim reimagines and revolutionizes the open-world fantasy epic, bringing to life a complete virtual world open for you to explore any way you choose.

LIVE ANOTHER LIFE, IN ANOTHER WORLD
Play any type of character you can imagine, and do whatever you want; the legendary freedom of choice, storytelling, and adventure of The Elder Scrolls is realized like never before.

YOU ARE WHAT YOU PLAY
Choose from hundreds of weapons, spells, and abilities. The new character system allows you to play any way you want and define yourself through your actions.

BATTLE DRAGONS
Battle ancient dragons like you've never seen. As Dragonborn, learn their secrets and harness their power for yourself.

GOG notice about the DRM-free version

​
Gather all of your viking friends and get ready for adventure! #Valheim is now available with 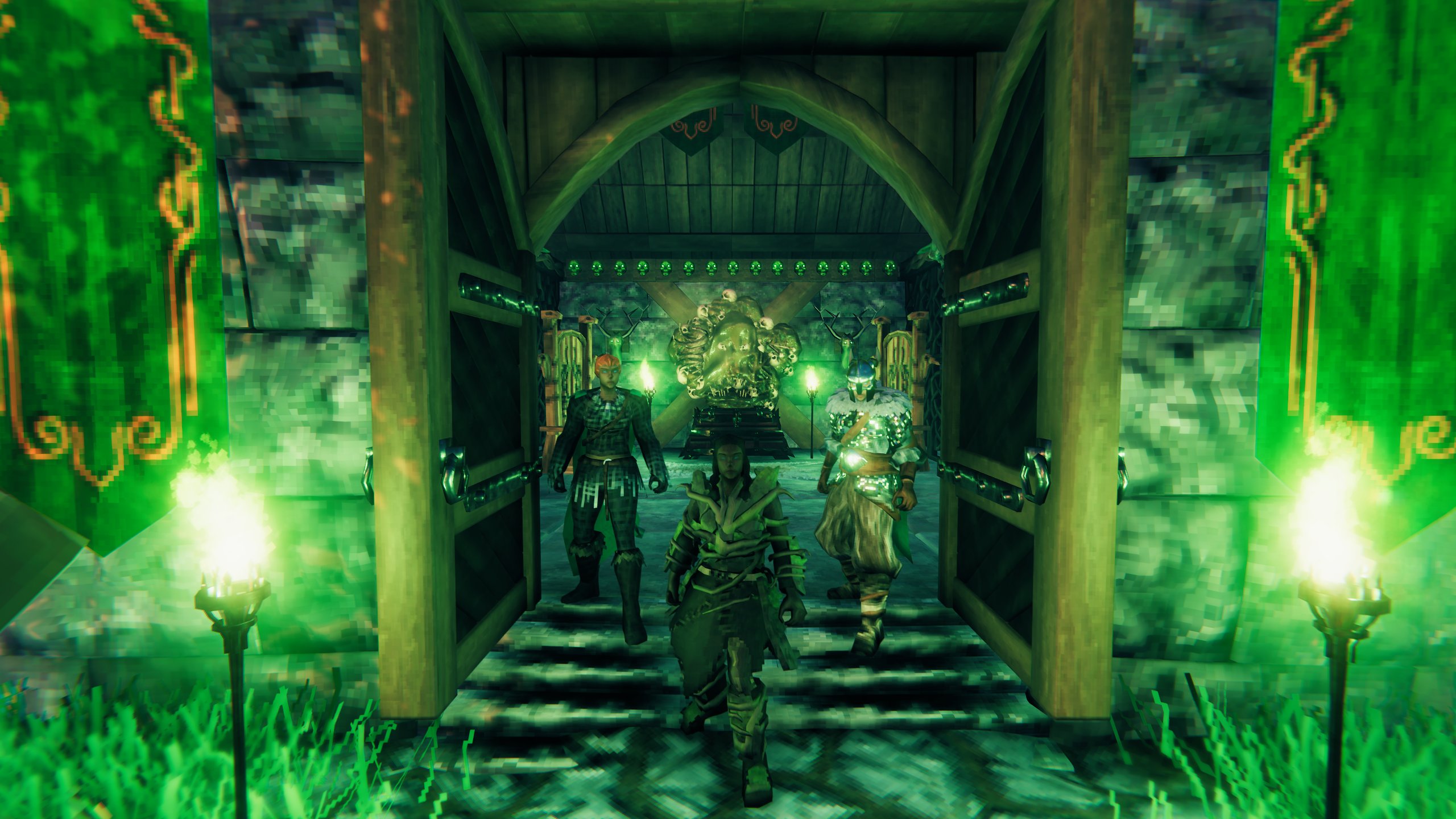 IGN checked out The DioField Chronicle:

Tactical Adventures posted a dev update for Solasta, in which they present the dragonborn race:

It's been more than a year since our last proper Dev Update (which marked the end of our Early Access!), with Solasta gradually growing larger and larger with new classes, races, improvements, a higher level cap and even another campaign. And now as we're close to getting the final classes to complete the roster, we've decided to give you guys a few Dev Updates every two weeks while waiting for Inner Strength to be released! But before that... for those of you who never read our Dev Updates before, get acquainted to a tradition of ours. Cats!

from 3e before that). Long story short: Spellplague happened, two worlds collided, hello Dragonborns welcome to Toril (apologies to all the Faerun historians that I've just offended). However, the biggest mystery when it came to the Dragonborn was... What's their origin?

Are they descendants of dragons (by blood)? Were they created by dragons (by magic)? Are they victims of a spell that turned them into Dragonborns? Do they simply share an older common ancestor with dragons? Turns out, all we have are legends... which is fine with us!

You see, we asked ourselves all these questions to make sure that our Solastan Dragonborn wouldn't go against the very nature of what a Dragonborn should be. Solastan Dragonborns are a little less mysterious than their official counterpart, they are simply descendants of unions between polymorphed dragons and humanoid lineages. Although they were well accepted in the Manacalon Empire, they became very reclusive after the Cataclysm due to a number of reasons. The newly freed slaves did not look kindly upon their former elven masters nor their collaborators (such as the dragonborns) - and their physical appearance would often draw suspiscion from those unfamiliar with the race. And with many grieving their losses from the Sorr-Akkath... So there you have it! In Solasta Dragonborns are rare and fairly secretive, only recently starting to venture back into more civilized lands. With most having completely forgotten about the Soraks, their striking appearance is also less stigmatized than it was in the past.

Cyberpunk 2077 has sold 20 million units, according to CDPR on Twitter:

Over 20 million cyberpunks have been roaming the streets of Night City - partying with Jackie and getting to know Johnny, driving around with Panam and diving with Judy, hanging out with River and listening to Kerry's songs. Thank you and we hope to see you all in the Afterlife!

Pathfinder: Wrath of the Righteous - Update on September 29

On September 29 PC users of Pathfinder: Wrath of the Righteous will get a free update to the enhanced version:

​
As a reminder: "Pathfinder: Wrath of the Righteous will arrive on consoles on September 29, 2022. The Enhanced Edition will be the standard version for the console release, featuring quality-of-life improvements and a photo mode, together with additional high-level content related to several mythic paths and other features and tweaks. All owners of the PC version will also receive a free update to the Enhanced Edition on September 29."

Drop Bear Bytes will have their AMA session this Friday 10am AEST (that's GMT+10), that they'll be streaming on Steam. -> Tweet

Version 3.1 of Genshin Impact is now available - a look back:

Broken Roads - The next Disco Elysium

PC Gamer thinks the post-apocalyptic RPG Broken Roads can be the next Disco Elysium:

​
Broken Roads has the potential to become the next Disco Elysium

The post-apocalypse returns to Australia.

He's not the only veteran on board. "Leanne Taylor Giles, our narrative director, recently joined us from Ubisoft Montreal," says Ritchie, aforementioned game director and studio founder. "She worked with Colin on Torment: Tides of Numenera, so that relationship already exists. She loves Planescape: Torment-she's got a Planescape tattoo. So we're bringing together fans of the genre, and people who've been doing the genre for decades."