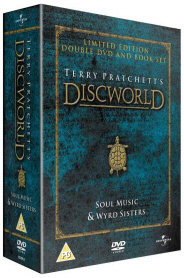 The Discworld DVD Box Set contains full length animations of Wyrd Sisters and Soul Music. Acclaimed by Terry Pratchett, they are the only adaptations of the Discworld series ever and as such a must-have for all fans of Pratchett's work. Also included is the Discworld novel Going Postal, thankfully the UK release, in paperback with the cover style we've grown to love. The box all of this comes in is also quite stylish, as you can see on the left, so you won't be ashamed of putting it on display.

The DVDs, which are the main selling point of this compilation, are a somewhat mixed bag. The Discworld purists could easily tear them apart for the omissions alone, but if you take them for what they are (an attempt at making a miniseries of Discworld cartoons both kids and adults could enjoy), you won't be too disappointed, since they do stay faithful to the spirit of the books. Unfortunately, the animation is quite amateurish in places for no apparent reason (I've noticed that some colours were not filled properly in a few instances, obvious differences in character drawings in sets of frames here and there - edited cuts?), but then most of it is passable, so it about evens out in the end. If you go in expecting Disney-quality animation, however, you'll be sorely disappointed.

It's a similar situation with the voice acting; from very good (Christopher Lee as Death) to god-awful and markedly miscast (character phenotypes not matching the voices), but mostly decent enough. There are also a few extras on the DVDs that are worth seeing (an interview with Terry Pratchett, Soul Music sound track, Discworld pilot, character introductions...), but nothing to write home about.

My biggest gripe with the DVDs is that neither Wyrd Sister nor Soul Music contain any optional subtitles whatsoever. A glaring omission that makes the DVDs useless to the hearing-impaired, and much harder to enjoy for anyone but native English speakers. Even some of our American visitors might have problems understanding bits of text here and there, especially at times when the voice actors' British accents kick in.

If you are able to ignore the obvious shortcomings of these Discworld animations and focus on the big picture instead, you will still enjoy them in the end. It needs to be emphasized again that they are quite faithful to the books, and much of the dialogue and recognizable one-liners are lifted straight from the text. But at the same time, one cannot help but wonder how much better animated adaptations of Pratchett's novels could have been if they had a larger budget when it came to animation and voice casting. It really boggles the mind why no one with enough money to make really stellar Discworld productions has approached Pratchett yet, either to make more cartoons, or actual movies - especially since Pratchett seemed very open to the possibility in his interview on the Soul Music DVD.

In any case, until something better comes along, this is it in terms of Discworld on DVD, so if you're a fan, you'll get it anyway, and then make up your own mind. The original separate DVD releases of Soul Music and Wyrd Sisters have been out of print in the UK for a long time, and even if you manage to still find them somewhere today, each would cost you nearly as much as this whole set, so if you live in Europe (not released in the US, unfortunately), look for this instead. And if you don't have Going Postal yet, even better. No matter how you look at it, this set is a bargain and can only be recommended. It also makes an ideal gift for any Discworld fan...

You can view the details and/or buy the set and the DVDs mentioned in our DVD store.

For more details about Going Postal novel you can check out my review from a while ago, so I'll just list the PR blurbs of everything included in this box set:

Moist von Lipwig, a fraudster and conman has to choose between being hanged, or put Ankh-Morpork's ailing postal service back on its feet. Not an easy choice to make...

But he's got to see that the mail gets through, come rain, hail, sleet, dogs, the Post Office Workers Friendly and Benevolent Society, the evil chairman of the Grand Trunk Semaphore Company, and a midnight killer.

Getting a date with Adora Bell Dearheart would be nice, too.

Maybe it'll take a criminal to succeed where honest men have failed, or maybe it's a death sentence either way.

Or perhaps there's a shot at redemption in the mad world of the mail, waiting for a man who's prepared to push the envelope...

If someone thrust a new born baby into your arms and told you to look after it, what would you do? Suppose you had a sneaking suspicion it was no ordinary baby? And suppose again, you were Granny Weatherwax - the most practical and pragmatic of a trio of ill-assorted witches.

But once even this problem is solved, a greater one takes it's place. After murder and skulduggery in the royal palace, the land - now ruled by a corrupt Duke - cries out for a new leader. Not the people, but the very land itself is calling for help, and the Wyrd Sisters must listen.

It's time for Granny and her two companions, Magrat and Nanny Ogg to get involved in matters both magical and regal, and give the land the King it deserves...

Floating through space is a giant turtle named Great A'Tuin. On his mighty back stand four elephants. On their backs rests the Discworld. What happens there can be very, very strange indeed...

There's a weird music taking over the land - it's fast, it's furious and they call it The Music With Rocks In. And what's more... it's alive.

And even more sinister... Death's gone missing, and who can possibly be qualified - or willing - to step into his black cape and wield the scythe?